Aullwood’s beautiful 200 acre nature sanctuary includes a rich variety of plant-animal communities.  Six miles of walking trails allow visitors to explore many several different habitats such prairies, young and old woodlands, wetlands, ponds and sustainable farmland. All these are a part of Aullwood's important land resources and help demonstrate the vital diversity of the living environments that birds and other wildlife depend on.

Prairie habitats can be found at the Center Prairie, Fertile Crescent, Knoop Prairie, and Center Gardens. Forests covered 95% of Ohio about 200 years ago. The rest of the land was mostly covered with tall grass prairie. Near Toledo, the sandy old edges of the Pleistocene lake are so quick to lose water that a fire ecology with oaks above and prairie below evolved. In the area of west central Ohio, glaciers left saturated areas that trees didn’t favor and prairie grasses thrived. In the southern part of the state little prairies grew on the crumbling, gravelly soils near the limestone cliffs. Nearby, in Indiana, railroad rights of way provided long thin sanctuaries for prairie plant while the rest became cropland. In the 1960s Aullwood’s staff went to these places and collected seeds, plants and plugs of soil to create the Center Prairie. Fires keep the trees out of this prairie garden where close to a hundred different plants can be found blooming from spring to fall.

Woodland habitats can be found at the Second Growth, Old Growth, Wet Woods, and Pine Plantings. Some trees found at Aullwood are very old. Settlers who cleared the land for farming left them for reasons we may never know. They are the showpieces of our old growth forest areas. These areas are most disturbed by non-native plants, especially bush honeysuckle. Second growth areas are rich with bird life. We have occasionally heard deep woods birds such as cerulean warblers in these areas. The songs of the wood thrush echo from the tall trunks of the deeper, richer woods and the red eyed vireo and eastern wood-pewee sing through the summer.

Wetland habitats can be found at the Wet Meadow, Wet Woods, and Farm Wetlands. Groundwater comes out of the ground all along the edge of the valley of the Stillwater. Aullwood has many springs and seeps. In some of these places special plants have persisted for thousands of years. We have added some since 1957, and over the time Marie Aull probably added some as well. In the summer the Wet Meadow is a riot of pink queen-of-the-prairie. Monarch butterflies visit swamp milkweed, Canada burnet and turtlehead shine in the sun. In addition to this area near the Center, there are wetlands near the Farm which, although neglected for years, are receiving inputs of native plants and labor to restore their beauty and diversity. At the southern end of the sanctuary where there is shallow and flat bedrock make wet woods. Here, skunk cabbage and marsh marigold thrive.

Pond habitats can be found at the Vernal Pool, Muskrat Marsh, Bluegill Pond, Spring Pool, and Farm Ponds. In this part of the temperate zone, natural ponds that stay filled through the year are uncommon. Aullwood has created several ponds that provide a rich home for frogs, dragonflies, bluegills, water boatmen and thousands of other aquatic plants and animals. The Farm Pond is ringed with a shallow edge that is perfect for pond study. The shoreline has been planted with native wetland plants. Bluegill Pond at the south end of the sanctuary has study areas and is perfect for a quiet time watching the frozen pond in winter, viewing the blossoms of redbuds reflected in the mirror of the pond, watching dragonflies of summer or enjoying the blaze of yellow sugar maples in the fall. The Vernal Pool is on the Wildflower trail. The Spring Pool is on the Center/Farm trail and provides a cold and shady refuge for larval salamanders.

Stream habitat can be found in the stream that runs through the heart of Aullwood, called Wiles Creek. It is fed by at least six springs and seeps as it makes its way from Aullwood Farm to the Stillwater River. It is a mile from start to finish and runs from about 1000 feet in elevation to about 800 feet. In its course you will find small falls where the water goes over the hard Silurian dolomite near the farm and shallow cascades where the layers of the softer Ordovician limestone lie near the Center. Sometimes the shallow water dances over glacial erratic pebbles and boulders. Sometimes it slows and drops its nutrients into deeper pools. This variety of habitats provides for a great diversity of life. It is clean enough to support many caddisflies, mayflies, damselfies, alderflies and other animals.

Lawn and garden habitats can be found in the lawns and gardens surrounding our center and farm. Lawns at Aullwood are never fertilized or treated with weed killers. The mix of violets, clovers, plantains, mints and grasses is just what we want. The dandelions are favorite early bloomers which give nectar to the early bees and butterflies. In addition,  garden beds are planted with native plants and shrubs.

About 440 million years ago, this part of the world was covered with a shallow warm sea. The bottom was covered with soft, fine, calcium rich particles that accepted the dead of those seas that have now become fossils. These very old layers of rock and their fossils are exposed at the surface very close to Aullwood along the Stillwater River. During Geology Field trips, students visit these beds with Aullwood staff to learn about this important age. Above the Ordovician limestones, shales and clays is the hard Silurian dolomite which underlies Aullwood’s farm. Many springs emerge from the valley’s slopes where these layers meet.

Between a million and 15,000 years ago Aullwood was covered by glacial ice which may have been up to a mile thick. The ice came and went with each advance and retreat grinding stone into fine, rich soils. The Miamian Silt Loam soils of the farm are a result of the mixing of local sedimentary bedrock and igneous and metamorphic boulders torn from the bedrock of the Canadian Shield 600 miles to our north. The boulder belt where early farmers found 10 to 100 boulders per acre runs through this area.

The land which is now called Aullwood was probably converted from forest to farmland in the first decades of the 1800s. Before then, the vegetation was likely a mixed mesophytic forest with some areas dominated by beech and sugar maple trees. Other areas were dominated by oak and hickory trees. Scattered in the forest were wet meadows with prairie-like communities and likely some dry prairies along the sandy tops of kames (steep sided deposits of glacial till). The land was surveyed in 1801 and a witness stone lies buried in our North Woods marking the corner of sections 13, 14, 23 and 24 of a then unnamed township. In December of 1801 Benjamin Chambers led a crew which surveyed the land that became Butler Township. Aullwood was all farmed from the early 1800s until 1957 when Marie Aull gave the land to the National Audubon Society. Along Frederick Pike, settlers from the east changed the face of the land. Polk Grove Church which sits across Frederick Pike from Aullwood’s Farm contains the graves of settlers with birth years in the 1740s.

In the fifty plus years of the National Audubon Society’s management, our sanctuary has grown richer.  When the land was changed from forest to farm in the early 1800s, a great diversity was lost.  The slow change from farm monocultures back to a diverse nature sanctuary is still progressing.  The planting of trees by Marie Aull and our introductions of native plants have enriched these areas. Old fields and pastures have been uncut for over half a century and are now respectable second growth forests. Aullwood Habitat Healers volunteers have worked to reduce the numbers of invasive plants and propagate native plants. A number of acres of land is farmed using Aullwood Farm's educational sustainable farming practices, but the rest continues to evolve. The landscape of Aullwood will continue to change via succession and other processes both natural and human.

Aullwood's sanctuary provides homes for many different living creatures. Lists of the plants and animals that have been identified at Aullwood can be found on our Flora and Fauna page.

Aullwood's Land Stewardship Plan provides a central vision for our ongoing efforts to manage our land resources. Our plan's objectives include:

Be a Friends of Aullwood Member

Explore, discover, and protect Aullwood by becoming a Friends of Aullwood member 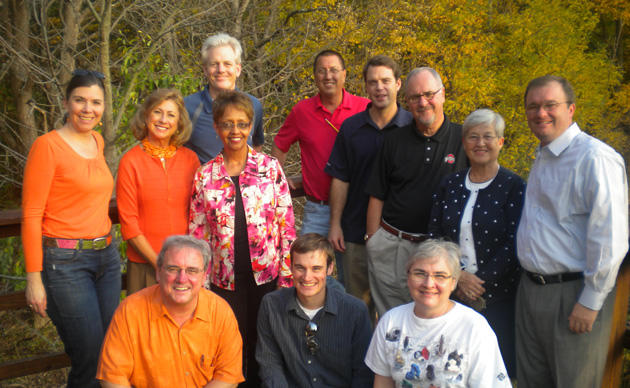 Learn and Engage with Aullwood

Get Involved with Our Community

There are many great ways to engage with the Aullwood community! Become a member, see our many volunteer opportunities, learn about internships and more.

Our quarterly newsletter Aullwood Member News is the best way to keep up to date on all the wonderful news and events at Aullwood!

See Our Trail Map and Brochure

See more details about Aullwood's features and trails, including our "The Troll that Hatched an Egg" exhibit by Thomas Dambo, on our trail map, last updated November 7, 2022.

Get the Trail Map

Spread the word! You can help make a difference.

Get the latest Aullwood news by joining our email list